The missions of compensation of FGTI

The Guarantee Fund for Victims of Terrorist Acts and Other Offences

The FGTI was created by the legislator to take care of victims of acts of terrorism by compensating the damages suffered.

As soon as the authorities have sent information to the FGTI concerning the circumstances of the terrorist act and the identity of the victims, the compensation officers dedicated to supporting victims of terrorism contact the victims directly, if they do not immediately go to the scene or to their place of hospitalisation.

This dedicated team assists them in putting together their claim and strives to quickly pay a financial advance to cover the initial costs. It then makes an offer of compensation to them as soon as the state of the damage is such that a final assessment is possible, i.e. the victim’s state of health is deemed to have stabilised by an independent medical expert. 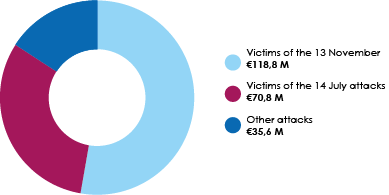 In 1990, the FGTI was entrusted by the legislator with the complementary mission of financially compensating the victims of common law offences.

As soon as the victim is compensated, the FGTI turns against the perpetrator, who was convicted of the offence, and demands reimbursement of the compensation paid. This recourse helps to make the perpetrators aware of the seriousness of the acts for which they are blamed, thereby helping to combat recidivism.

3/ Assisting in the recovery of damages awarded to victims

After obtaining damages — often small amounts — in a criminal trial, victims of crime who are not eligible for compensation before the Crime Victims Compensation Board (CIVI) often have the greatest difficulty in obtaining payment from the perpetrators.

Due to unwillingness on the part of the convicted perpetrators or their actual insolvency, the victims must shoulder the efforts to recover these sums alone, which involves considerable financial commitment.

In order to remedy this situation, the legislator decided in 2008 to create a mechanism enabling these victims to benefit from the FGTI’s intervention to recover the sums owed to them, either in full or in the form of an advance and then within the framework of a mandate: this mechanism is the SARVI.